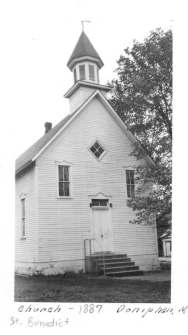 In 1857, a St. Louis diocesan priest, Father John Hogan, explored southeastern Missouri and discovered vast areas of untouched land abundant with game and timber.  He remembered this when attending to the plight of Irish immigrants who were living in shanties along railroad tracks in St. Louis.  Eventually, he established a settlement in what would become known in legend and history as the "Irish Wilderness".  Throughout the winter of 1858, small groups of Irish families drifted into the wilderness until, in spring of 1859, there were 200 Irish immigrant settlers in the "Irish Wilderness" when the church, named in honor of St. Benedict, was built.

The Civil War between the North and the South would lead to the demise of the settlement as it was taken over by the outlaw band of "Missouri Bushwhackers".

It was not until 1878 that Michael and Annie Stack gave Archbishop Kenrick a plot of ground on the Doniphan road about 3 miles from town.  The deed stipulated that a new St. Benedict Church was to be built on this site.  Although nothing remains of that church structure, the site is the current St. Benedict Cemetery on Ball Park Road near Doniphan. 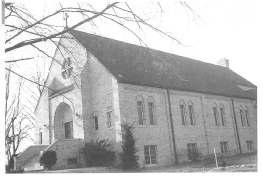 By 1889, a new St. Benedict Church was completed on a plot of ground from Mrs. Sophia Kegler in the Kegler addition to the town of Doniphan.  The increase of settlers in Ripley County created the need for building mission chapels at Beaver Dam, Oxly, and Pulaski, which thrived for many years.  However, shifting populations and improved means of transportation rendered the mission chapels unnecessary and, one by one, they were closed, and the various communities were incorporated into the St. Benedict parish. Eventually the frame church in Doniphan became inadequate for this enlarged parish.  In 1947 Archbishop Ritter gave approval to Father Bernard Timpe for a new structure, and in 1949 the new St. Benedict Church was dedicated. Through the generosity of St. Louis friends, a new rectory was built by Father Raymond Schuerman in 1953.   These remain the home of today's St.Benedict parish.  The church grew in members, thriving with Irish and Polish farm families until modern farming techniques ended the family farm and those Parish members dispersed looking for new means of employment.  The membership hovers at 100 families in 2017.

The missionary labor of St. Benedict Parish continues to the present day with Father Michael McDevitt and Father Simon Enudu attending to the flock of Doniphan and the neighboring parish of Sacred Heart in Poplar Bluff.  (Photo-interior St. Benedict Church 1949) 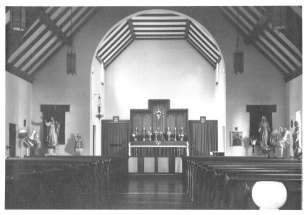 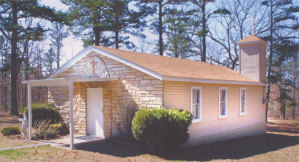 The missionary labor of St. Benedict Church continued with the building of the mission church St. Anne in Grandin, in 1959.  The parish included Catholics living in Hunter, Ellsinore, and along Ten Mile Creek.

Sat & Sun: 30 minutes before Sunday Mass. Saturday after Mass, or by appointment.

How Do I.... ?
Prayer Chain
Daily Readings
My Offering