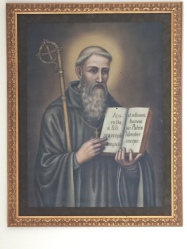 Benedict was born in 480 into a distinguished family in Nursia, Italy. (His twin sister was a nun, St. Scholastica).  He was educated in Rome, was repelled by the vices of the city and in about 500 fled to Enfide, thirty miles away.  He decided to live the life of a hermit and settled at mountainous Subiaco. There Benedict met a monk, Romanus, who gave him the monk's habit. By his advice Benedict became a hermit and for three years, unknown to men, lived in a cave; Romanus served the saint and reportedly visited him frequently, and on fixed days brought him food.

Despite Benedict’s desire for solitude, his holiness and austerities became known and he was asked to be the abbot of a community of monks at Vicovaro.  He accepted, but when the monks resisted his strict rule and tried to poison him, he returned to Subiaco.  Still, the shift from hermit to community life had begun for him, and soon he attracted great numbers of disciples.  He organized them into twelve monasteries under individual priors he appointed, made manual work part of the program, and soon Subiaco became a center of spirituality and learning.  He left suddenly, reportedly because of the efforts of a neighboring priest, Florentius, to undermine his work, and in about 525 settled at Monte Cassino. He had an idea of gathering various families of monks into one “Grand Monastery” to give them the benefit of unity, fraternity, permanent worship in one house. Finally in about 530 he began to build what was to become one of the most famous monasteries in the world and considered to be the birthplace of Western monasticism—Monte Cassino, commanding three narrow valleys running toward the mountains north of Naples.

Soon disciples again flocked to him as his reputation for holiness, wisdom, and miracles spread far and wide.  He destroyed a pagan temple to Apollo, brought the people of the neighboring area back to Christianity.  He organized the monks into a single monastic community and wrote his famous rule prescribing common sense, a life of moderate asceticism, prayer, study, and work, and stressed obedience, stability, zeal, and had the Divine Office as the center of monastic life;  it was to affect spiritual and monastic life in the West for centuries to come.  While ruling his monks (most of who, including Benedict, were not ordained), he counseled rulers and Popes, ministered to the poor and destitute about him, and tried to repair the ravages of the Lombard Totila’s invasion.  He died at Monte Cassino on March 21, 547.  He was canonized in 1220.

Benedictine asceticism is known for its moderation, and Benedictine charity has always shown concern for the people in the surrounding countryside. In the course of the Middle Ages, all monasticism in the West was gradually brought under the Rule of St. Benedict.

Benedict’s twin sister, St. Scholastica founded and was abbess of a convent at Plombariola near Monte Cassino.  She died there in 547, days after a visit to her brother. She is considered the first Benedictine nun.  Her feast day is February 10.

The Church has been blessed through Benedictine devotion to the liturgy, not only in its actual celebration with rich and proper ceremony in the great abbeys, but also through the scholarly studies of many of its members.  We should be grateful to those who both preserve and adapt the genuine tradition of worship in the Church.

Saint Benedict is the Patron Saint of:

At Enfide, Benedict worked his first miracle by restoring to perfect condition an earthenware wheat-sifter (capisterium) which his old servant had accidentally broken. The notoriety which this miracle brought upon Benedict drove him to escape still farther from social life, and "he fled . . . . and sought the more retired district of Subiaco". –excerpted from “Saints” -ewtn.com

Sat & Sun: 30 minutes before Sunday Mass. Saturday after Mass, or by appointment.

How Do I.... ?
Parish Calendar
Daily Readings
My Offering